Anyone that knows me will know that I’m an avid fan of hip hop. Most of the music that I listen to is in that genre, and is pretty well restricted to the 1996-2003 era. During that time, the lyrical content of hip hop songs came under heavy fire. Parents and governmental agencies alike attacked the music and the culture for promoting violence, disrespect for authority, and particularly, profane language. I remember those debates well, and I vividly remember not being allowed to listen to songs or certain radio stations because of their lyrical content.

Now I’m somewhat older, questionably wiser, far more of an analyst, and am possessed with a similar level of curiosity for the world as I had when I heard my first Biggie track. I’ve played my favorite songs over and over again, chock full of the profanity that I missed as a kid, and I noticed that yeah, those songs are really, really not for kids. But I could only feel that way one track at a time. I get my 3 minutes and 30 seconds to make my judgement, then it’s on to the next (on-on to the next) one. Quantitatively, however, I don’t really have a clue just how thick it is. As such, I’ve decided to join two of my loves—data analysis and hip hop culture—and answer the following question: just how much vulgarity exists in the heights of hip hop?

I didn’t initially know where to get a comprehensive list of top hip hop albums, so I looked at Wikipedia. There’s this nice little table of “best-selling hip hop albums in the United States according to the Recording Industry Association of America.” As far I could tell, it was last updated in 2013. No matter, I could still rock with it.

I got as many song lyrics as I could for those albums from songlyrics.com. It was nice because they repeat the chorus and keep a lot of the ad libs, so I’m getting the most that I can. Unfortunately, I ended up missing 8 albums because they were either not found or weren’t categorized right. Even so, I still managed to look at 99 albums, for a total of 1,472 tracks! Sure, these don’t represent all of hip hop (can’t really rep all of anything), but these are the best selling albums of all time. As such, these albums are the way that hip hop and we that listen to it present ourselves to the world. Something to keep in mind moving forward.

I looked at 3 of your run-of-the-mill offensive words, and of course the notorious N-word. The results…well, see for yourself. 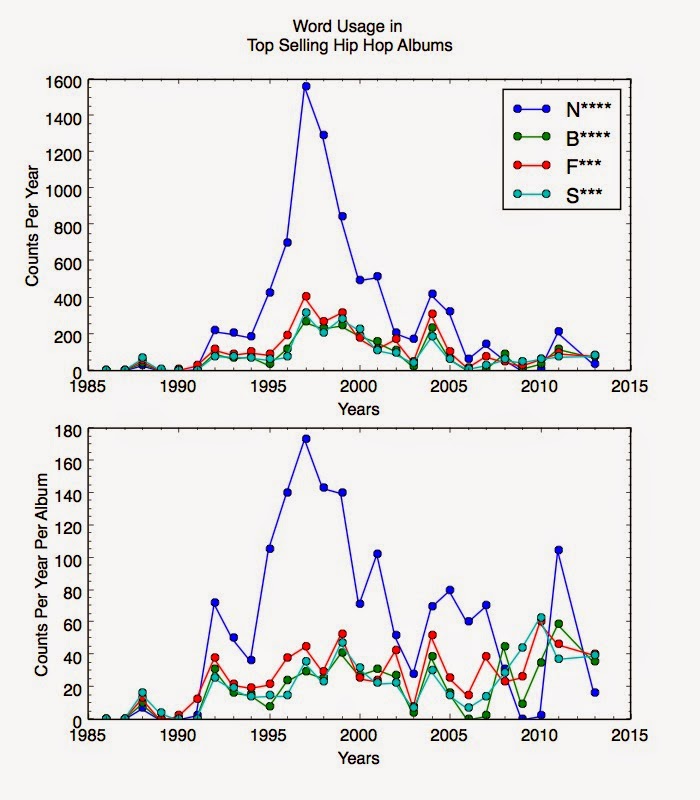 What you should see above these words are two graphs of word usage over time. The first graph is counts per year for each year since 1985. What this means is I totaled all the instances that particular word was used in every track in every album (that was available to me) that came out that year. For the N-word I included every possible variation I could manage. I wasn’t as diligent with the others (I added b–ch and b–ches together, but didn’t give enough damns to find more “f–k”s), but their close cousins don’t add much to their totals. The bottom graph is similar to the top one, but accounts for differences in album sales. Think of it as the word usage per album on average.

So…wow. I’d love to say something about the explosion of vulgarity in 1993 and how it’s been sustained over time, but that blue line is startling. What does this say? Best-selling rappers love saying the N-word. Obvious. Sure, the other ones have pretty bad frequencies too (does anyone really need to say “b–ch” 40 times per album?), but nothing compares to the N-word. It’s no wonder why we’re often seen as that which the word describes—we say it ALL THE DAMN TIME! Hell, it could be said that in order to make the top albums list, you need to pepper in as many n–gas as you can while still maintaining some degree of grammar (I’m looking at you, YG). Thankfully it’s decreased over time, though I’m skeptical. Still, we as carriers of this culture just need to do better.

The C’mon Son award goes to DMX. The three albums he has on this list have the following N-word statistics: 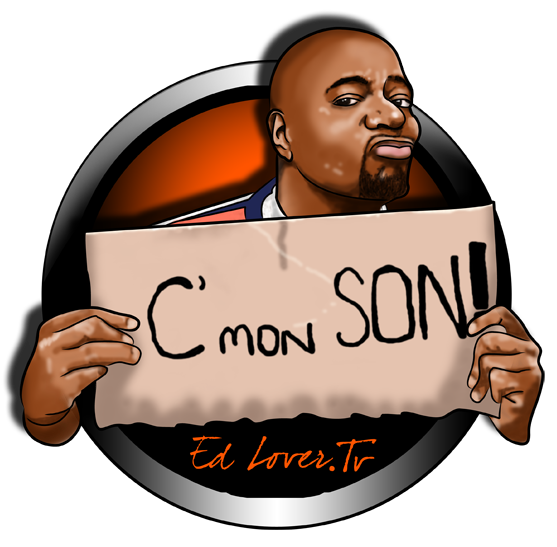 Cheers til next time!

Thanks to wikipedia for having a mostly-consistent HTML structure across your album pages (though those didn’t end up in the final product). Similarly, thanks songlyrics.com for that, and having album cover images that I could use for my mosaic after the jump.