Cross-Post: US Population By Longitude & Latitude

Here’s a short post by my friend Jim over at his blog ifweassume. In it, he takes this post from Visual.ly and adds his own US Census data to it to come up with a population density map of the United States. Interesting where all the little pockets are. Note: the horizontal plot is density according to latitude, and the vertical is density according to longitude.

My friend Eddie reminded me of this nice set of figures that made the rounds a few months ago on Visual.ly (and also Reddit).

I thought it would be cool to zoom in on the USA in high detail using data from the 2010 US Census… so that’s what I did. As a bonus, the pixels represent the density of ZIP codes in small bins, which essentially track population density. Enjoy! 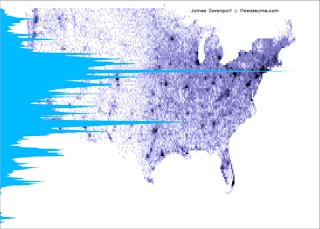 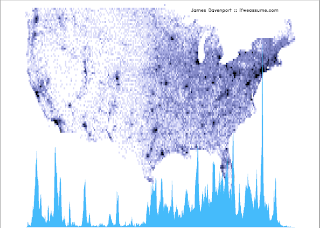