This is my second post about the orixás of Candomblé. This time, we’ll chat about the Orixá of freshwater, love, beauty, wealth, and other such things: Oxum (Oshun, Ochun; pronounced “oh-SHOON” regardless of spelling). A bit of disclaimer before we begin (and this will be at the end as well): I am by no means an expert on Orixás of any religion, be it Candomblé, Umbanda, Yoruba, Santeria, Vodou, or anything else. I’m just a dude with a lot of curiosity and the power of the internet. As such, if you see something here that seems kinda fishy, take it with a huge grain of salt. And if you know more about the subject matter here, please please PLEASE speak up and point me in the right direction. I also didn’t do references like I did last time, as this was much more of a synthesis of ideas instead of a line-by-line pasting (except where mentioned).

As with the other orixá in Candomblé, Oxum doesn’t simply have one association. To begin with, there’s always the association with nature—Oxum rules over fresh water (as águas doces). This includes rivers, lakes, waterfalls, and streams; all water that springs from the earth and has yet to reach the ocean, the realm of Yemanjá.

As the rivers do for the people that use them, Oxum nurtures and purifies. She provides food by way of the fish that swim with her, clean drinkable water for the thirsty, the source for growth via the irrigation of nearby plants, and waters within which you can cleanse yourself. As such, she’s also associated with maternity, fertility, femininity, vitality, and purification/healing. 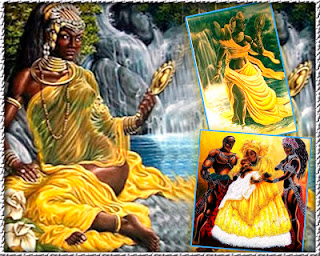 Expanding more into the feminine qualities, she, like YemYemanjáanjá and other female orixás, represents not the entirety of the feminine psyche, but specific parts. Her demeanor is loving, caring, nurturing, and seldom ever angry. She is the sweetness in sweet women; the very personification of the “sweet princess” concept. At times, she is even somewhat coquettish, and there are many stories about her seduction of several of the male orixás. However, while sweet, she is not eternally docile. Like the rivers in a violent storm, when she loses her temper, she can be widely and indiscriminately destructive. By no means is she naïve; her wisdom and counsel often being sought by men and women. 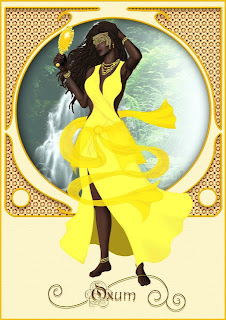 She is also, in a word, beautiful. Now, typically the female orixás are all described as beautiful, so to simply describe her as such does her no justice. She is not just beautiful; she is beauty. Because beauty is her quality, she’s often depicted holding a mirror (the symbolic item of beauty), and in provocative clothing (if there’s any clothing at all). In the same way that she is beauty personified, she embodies female sexuality. As such, children of Oxum (women AND men that Oxum chooses to share her spirit with; “possess” only describes half of the process) are to be stunningly beautiful and are always the subject of attraction. Though beautiful, they are by no means dumb; I cannot stress this enough. They appreciate luxury and sex, they are vain, elegant, sensuous, and like changes, at times resulting in infidelity. But, they are calm, tranquil, emotional, and cry easily. They are smart, managing to get everything they want through imagination and plot. Though complacent and prodigal, they can be self-seeking, lazy, and hesitant. They are very suspicious, and have a great intuition which is often put to work for artfulness (plagiarized mostly from here). Oxum’s children also favor bright colors, music, dance, and excitement.

Her dominion over fertility should not go without mention. As the orixá of fertility, she protects all pregnancies. Interestingly enough, while she herself loves to become pregnant, she is not inclined to raise her children, having a tendency to pawn them off to her siblings (terrible!). But yeah, as much as women in Brazil may pray to Oxum to find their luck in love, they will also look to her for protection in their pregnancy.

Oxum is one of the children of Oxalá (the male orixá of purity, light, and creation) and, as one might expect, Yemanjá (the “All-Mother” if you will, and orixá of the oceans), and the most loved of those children. She was at a time one of the wives of Xango (warrior orixá of fire, thunder, justice, and male power/sexuality), taking him from his original wife Iansá (orixá of winds, hurricanes, change, and gates of the underworld), but as is her nature, she floated in and out of that relationship, has been a lover of Ogun (warrior orixá of iron, war, labour, sacrifice), Orunmilá (orixá of wisdom, knowledge, and divination), and seducer of Exu (orixá of many things, not least of which are trickery and messages between orixá and man). One myth I’ve found (and likely poorly translated and interpreted) goes as follows: Oxum was always extremely curious and passionate for an orixá. She had wanted her father’s best friend, the orixá Orunmilá, to teach her how to see the future. This secret was the domain of the Oluô/Awo (essentially Orunmilá’s priest), a position that could not be held by a woman. Determined to learn divination, she tried to seduce the information from him, but Orunmilá, already old and beyond her seductive abilities, refused to teach her.

Not to be deterred by this minor setback, Oxum set about trying to find other ways to learn this secret. She turned to seduce Exu, who couldn’t resist being enchanted by her beauty. She ordered him to steal Orunmilá’s ikin. For reference, the ikin (consecrated palm nuts) are generally used for divine protection, and special four-eyed ikin are used for divination. Having managed to steal Orunmilá’s ikin, Exu gave them to Oxum. As such Orunmilá was forced to share with Oxum the secrets of fortune-telling and handed her the sixteen cowrie shells that she has used for divination ever since. Wow, that was confusing. Long story short: She wanted Orunmilá to teach her to see the future, but he refused. She seduced Exu and made him steal the Orunmilá’s fortune-telling ikin, and once she had them, Orunmilá was like “screw it, here’s the secrets.” This shows Oxum willing to get what she wants by any means necessary. 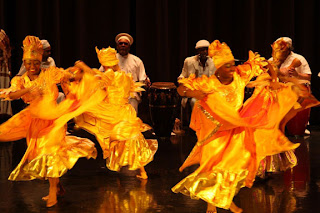 Like the other orixás, there is a ceremonial dance associated with the celebration of Oxum (what follows about the dancing was mostly plagiarized from here). Oxum usually starts her dance slowly with hand motions. She is usually dancing in the middle of the floor, her feet positioned closely together as it was said that she lived in the river like a mermaid. Thus, she has no real foot choreography. She makes small dance steps and she usually slides across the floor, rather than steps. Her lack of dance steps makes us focus more on her arm movements, as well as her chest, neck, and stomach. Her dance is very complicated because the sternum must be in command, since Oxum lives in the waters. The hands should always be at the side of the body with palms up. The body is required that the shoulders do slight contradictions up as the elbows move away from the body and down as they close in. She dances with grace and she constantly drops to the floor to collect water. Oxum’s arms go up and she slides her tail. She uses her mirror, as well as her lipstick, rouge, and her comb. 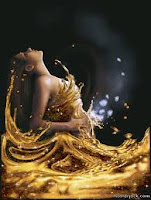 If you’ve been reading this far and have been paying attention the entire time, you’ll notice something of a constant with representations of Oxum. She’s always depicted wearing yellow and gold, or when her clothes are few, possessing items of yellow/gold. Yellow is her color, and gold is her metal. As she represents beauty in its purest form, she keeps beauty about her in the form of gold and precious items. Looking across cultures, she’s worshipped in many essentially parallel religions, and they each have small differences in how they worship. It’s thus difficult to pin down her Feast Day. However, regardless of location, it appears to occur sometime around the second week of September (though there is a mention of a date in December). It is then, as well as whenever else she is worshipped, that followers will offer such things as honey, pumpkin, white wine, rum, cakes, jewelry, and hens.

I think that this is probably about enough to get a decent picture of this orixá. Let’s end as we did before, with some more artwork pertaining to Oxum. I wanted to put up some videos of songs pertaining to Oxum, but they’re not showing up here so, bleh. Ora iéié Oxum! 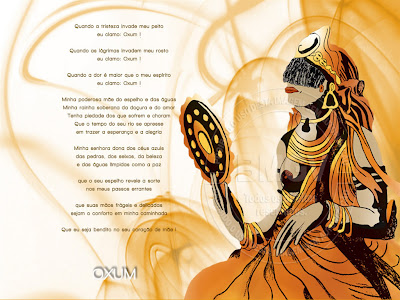 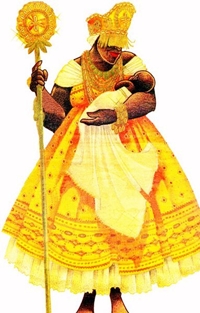 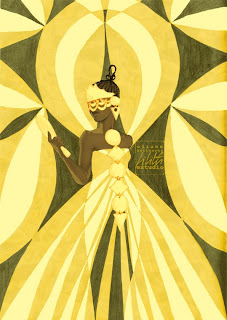 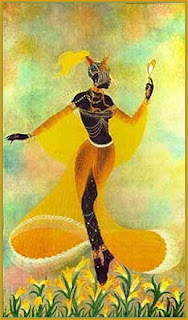 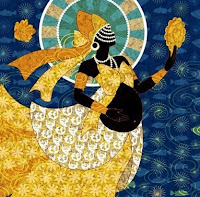 Disclaimer: I am by no means an expert on Orixás of any religion, be it Candomblé, Umbanda, Yoruba, Santeria, Vodou, or anything else. I’ve also only taken what amounts to 9 months of language classes in brazilian Portuguese. I’m just a dude with a lot of curiosity and the power of the internet. As such, if you see something here that seems kinda fishy, take it with a huge grain of salt. And, if you know more about the subject matter here than I do, please please PLEASE speak up and point me in the right direction. My only goal here is to present what I’ve learned, and learn more when I can. It’s really difficult to nail down the details of concepts that have far more of a verbal and physical history than a written one.