Because of my involvement in Capoeira, and a long-standing interest in the histories and cultures of the descendants of black slaves in the Western Hemisphere, I’ve become pretty heavily interested in the religion (some would say cult, and I would say that’s disrespectful due to the connotation of the word “cult”) of Candomblé. I’ll write something about Candomblé as a whole at some later time, but with this series I’d like to focus in on the gods of Candomblé. These gods are known as Orishas (or Orixas), and they rule over different parts of existence. This particular post is going to be about Yemanjá, the Orisha of the waters and the feminine principle of Candomblé.

Yemanjá appears throughout Candomblé, as well as Cuban Santería, Haitian Vodou, and (originally) Nigerian Yorùbá as the queen of the seas and oceans. Before continuing, I’d like to point out that the name of this Orisha takes on different spellings between different cultures, and that I’ve chosen this particular spelling of her name because that’s how I was introduced to it via Capoeira. Other spellings (and names) that I’ve come across in my brief research are:

There is no doubt in my mind that there are more names to be found. However, in relating the entity across different cultures, it’s important to keep the pronunciation in mind. That way, even though you may not recognize the word on the page, you’re able to still talk about the same entity with speech. It’s my suspicion that the differences in spelling reflect the differences in phonetics across different cultures. I feel as if it is the result of people trying to write down a name without knowing how to spell it first, and so they adapt the same sound to the phonetics of their particular language. The pronunciation that I’m familiar with is yay-mahn-YAH, though there’s a certain rhythm to the phonetics that I can’t quite capture via text. Such is life. 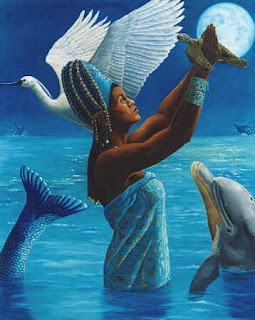 So Yemanjá, queen of the waters. Her name is a contraction of the Yoruba words Yey Omo Eja, which collectively mean “Mother Whose Children are the Fish.” Depending upon the source, her origin and relation to other Orishas change. The commonality between them all is relatively brief. She rules the waters and oceans. She takes the form of a woman with long, black hair, and appears either wearing a flowing blue dress, a flowing white dress, or a flowing blue and white dress. She wears a type of veil with beaded fringes that hide her face, and holds a mirror (often cited as a metal fan) in one hand representing her beauty. Her colors are, as you might imagine, blue and white (and variations in the shades of each). She’s always represented as one of the superior divinities, and associated with femininity and fertility, but her exact station changes with the person talking about her. 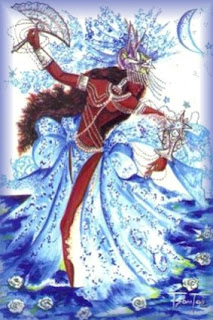 Her place amongst the Orishas is where the interesting differences begin. From some sources, she is considered the Mother of All, where all life came from the sea. In others (including the image at the top of this post), she’s still one of the superior Orishas, but is the daughter of Obàtálá (Oxalá, Orixalá, Olufon; the creator of human bodies), who in turn is the second son of Olòrún (Olodumare, Olofi; the supreme orisha) who provides the vital energy, a.k.a. axé (ah-SHAY), for all of living existence. In one more, she’s the daughter of Olokun, who is different from Olòrún, and is genderless (or beyond gender) and also associated with the sea, unfathomable wisdom, and the unconscious.

From her, many (or all) of the Orishas are said to be created. I’m going to take a lot from Yoruba for this. Different sources have her as the mother of Oyá (Yansá, Iansä, Yansan; female orisha of winds and storms), Oba (marriage and domesticity; fem), Olokun (HOW?!), Olosa (orisha of the Lagos Lagoon; fem), Dada (newborns and vegetables; male), Shankpanna (Babalu Aye, Omolu; smallpox; male), Aje Shaluga (wealth; male), Orisra Oko (agriculture; male), Oke (mountains; male), Oxossi (hunters and forests; male), Oxumare (rainbows, movement, and activity; genderless), and Shango (thunder and war; male). Exactly which of this bunch (and others not mentioned here) actually did come from her varies on location and who’s telling the story. While she is formally the wife (and sister?!) of Aganju, Orisha of the soil, I remember her being the consort of someone else whose name escapes me. Maybe it’ll come to me later.

Due to the heavy indoctrination of slaves into the Christianity of their slave masters, the Orishas of Candomblé also find themselves associated with some of the saints and holy figures of Christianity. Yemanjá in particular is connected with Nossa Senhora, or the Virgin Mary (considering her motherly status, this really confuses me. However, I’ve never been one to make much sense of religion anyway). 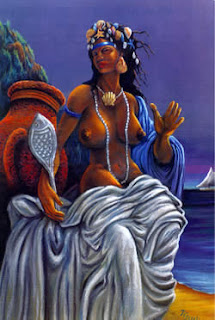 Aside from all of her familial relations and religious associations, the Yemanjá the Orisha has a personality, and women that are said to be daughters of Yemanjá tend to embody some of these elements of her personality. She can be at times be coquettish and vain, as she is said to be quite beautiful and knows it. At the same time though, she is seen as the loving and protective mother of mankind. She cares deeply for all her children, comforting them and cleansing them of sorrow. She does not easily lose her temper, but when angry she can be like the Sea in a storm—wildly and indiscriminately violent and destructive. She plays the role of provider (fish to fishermen), teacher, and possessor of the secrets of the depths of the ocean. Oftentimes in Western society, her more powerful nature is downplayed, as women tend to have been forced into a backseat role. However, this aspect of strength that she possesses is as much a part of her character as her role as a mother. In total, she is the main Feminine Principle of Candomblé, Yòrúbá, and Santería, and all that that entails.

Because Yemanjá is such a large figure in Candomblé (and the others), she has associated with her many ceremonial rituals with pretty specific elements. These celebrations typically incorporate someone that embodies the Orisha through dance as well as costume. This portion is all coming from the same source [7] (with grammar and spelling edited because their grasp of English drives me nuts), so take it up with them if you disagree. Her dance movements represent the sea’s tumbling waves, these moves resemble the art of sewing nets, but also commonly represent a story line. Her ocean dancing represents the salty water cleansing the distressed soul, or a newborn. There is a lot of emphasis on the hands and the legs in Iemanja’s dance. The hands alternate with palms that are neither flat nor round. Then there is the shifting of weight from one knee to the other. Her dances can also be done with the help of a skirt instead of the hands, or her fan, to represent ease. She usually dances with a silver blue dress and something which resembles a fishing net, so as to represent herself as both fetus [is this really supposed to be fetus?] and fish. Her metals are lead and silver, and her colors are blue hues and whites. The ensemble varies only slightly for different candombles, and fundamentally consists of a silver-colored metal crown (often fringed with beads), bead necklaces, a blouse, fan, crown, sword, heavily-starched underskirts, silver-colored metal bracelets, armlets, and skirt bangles.

The fan (abebe), which is silver-colored metal, represents her beauty and her status as Oxala’s younger wife. With the swaying of the fan back and forth, Iemanja has the power to bring peace and coolness to the universe. This motion of the fan can also represent the fanning away of negative forces. Usually, twelve to sixteen stranded necklaces are worn in festivals, which contain silver symbolizing the clarity of the surface of the water. These also represent Iemanja’s composed and principled moods. The skirt (saia) establishes its fullness from a couple or more petticoats (anaguas). A unique starching technique was used to make these anaguas, and was handed down from mother to daughter by slaves, though today it is only with the boundaries of candomble.

I personally like the idea of Yemanjá. I like the concept of having a female entity act as the divine royalty of the seas and the origin of all creation. It makes mythological sense to me, considering many aspects of the sea and who I know my own mother and other strong women in my family to be. For one, the ocean is vast, with water covering roughly 70% of the Earth’s surface. Its extent is vast, and as such its temperament has far-reaching consequences. Currents under the water’s surface cause warm water to circulate to northern latitudes, and the capacity of water to regulate heat keeps coastal cities secure against wild fluctuations in temperature. The gentle rolling of waves onto and away from the coast are calming like a mother’s comfort. Life began in the waters, as our lives begin inside our mothers. The oceans provide food and oftentimes a gateway to the rest of the world, as mothers do. On the flip side, the ocean’s wrath can strike the fear of god into you, like mom can when you’ve stirred up her anger. Hurricanes that develop over the water can level cities, while tsunamis can wipe miles of civilization from the face of the Earth. As a mother might be inclined to remind you when you’ve sufficiently pissed her off, she brought you into this world and she can just as easily remove you from it. So it is with the oceans.

I happen to think that artwork of Yemanjá is particularly gorgeous. So, before the references get up there, I’m going to just let loose with a handful of images of Yemanjá as supplied by Google. There are of course many representations of her, but I’m going to stick to the brown-skinned ones because Candomblé is a religion founded by brown people. And because I’m biased, as I am also brown people. Enjoy! 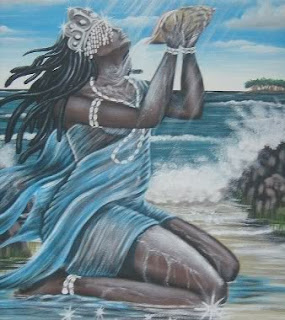 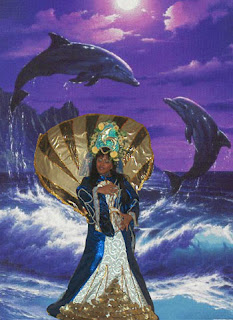 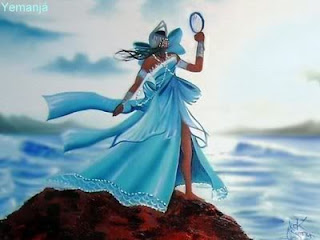 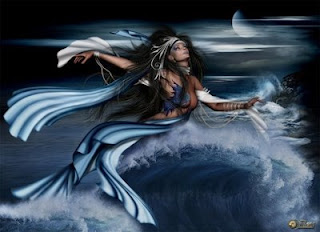 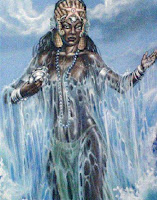