Black holes are one of those mysteries of science that sci-fi writers like to toy with. They’re menacing! They huge! They have some mysterious cosmic sucking power! I want to clear the air here about these magnificent, mysterious objects. Note, this isn’t going to be a comprehensive or exhaustive explanation about black holes. Just a little bit more information to clear a lot of the unknown.

Let’s start with their basic nature. We talk about black holes in terms of mass because, technically, the actual objects actually have no size. Let’s separate two things: the singularity is the actual collapsed object that has all the mass; the event horizon (the “black hole”) encompasses the region of space where light cannot escape. More on the latter in a bit.

What do I mean by a “collapsed” object? To get that, we need to go back to gravity (which is, after all, only a theory). The force of gravity is the attraction felt by any two objects that have mass (what we think of as weight). The bigger the mass of either object, the stronger the force of gravity. The larger the distance between them, the weaker the force. One way to think of it is like this: mass can be thought of as an amount that something likes to pull and be pulled. The more mass it has, the more it wants to pull and be pulled. However, the further away it is, the harder it is to actually pull. Every object is gravitationally attracted to every other object everywhere at all times. Me to my laptop (more of an addiction than an attraction), my phone to the floor, the Moon to my shoe, the Andromeda galaxy to the left wheel of your car—as long as two objects have mass, they will be attracted to one another. 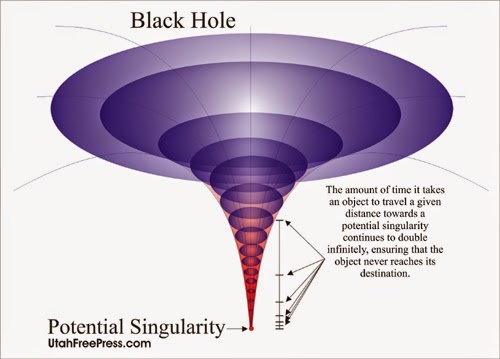 In a star, all the mass in the star is feeling the force of gravity of itself, and is constantly trying to pull itself together. This is countered by the force from energy generated by nuclear fusion (discussed a bit here). These two processes together act a lot like a hero trying to stop the walls from closing in on her. If the star’s core stops producing energy (the hero’s strength fails), the star’s entire mass collapses toward the center (the walls crush her to death). This is what happens at the end of the life of a high-mass star. If the star is massive enough, the attractive force of gravity of its collapsing core is stronger than any repulsion that could possibly stop it, and all that matter gets crushed together. Down from the size of a star to smaller than a planet. Smaller still—smaller than an apple. Smaller than a penny! Smaller even than that little piece of dust floating through the air. Smaller than the smallest thing you can possibly imagine! In fact, it becomes so small that to give it a numerical physical size doesn’t even make sense anymore—we describe it as being a singularity that’s “infinitesimal”. I think of it as a fast way of saying “infinitely small”.

Ok so the “black hole” part itself. Remember that the collapsed singularity retains all that mass from before. With objects that aren’t black holes but do have mass, there’s a certain speed (velocity) that you can travel to leave their gravitational pull (escape). It’s called the escape velocity (we’re not creative people), and is a minimum speed limit controlled by the mass of the object and your distance from it. As an example, I have about 80 kg of mass. And for simplicity’s sake, let’s crush me down to a sphere of radius 50 centimeters. If you’re standing right next to me, then to escape from my gravitational pull on you (note, your mass doesn’t matter), you’ve got to move at 0.00045 miles per hour. So, you know, you could just walk away. To escape the Earth’s surface, you have to move at 25,000 mph (which is why we need rockets). Now, the fastest any object can move is the speed of light, 670 million mph. So, with black holes, we define the hole’s size (or event horizon) as the distance from that central mass out to where the escape velocity is equal to the speed of light. Within that distance, the escape velocity is higher than light speed, so within the event horizon nothing can possibly escape (except for some extremely special circumstances). Since not even light can escape from the event horizon, that region of space within the event horizon is black. It emits no light, and zero light is black. Again, astronomers are not creative people. 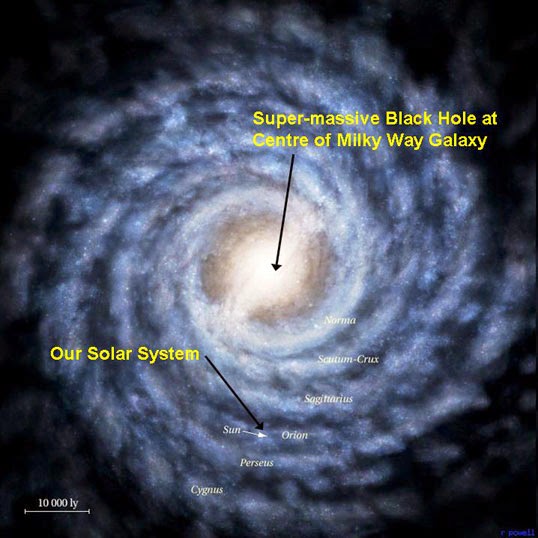 So with that, let’s dispel our first myth: the sizes of black holes. Even for supremely-massive singularities, the black holes are fairly small. A black hole with the mass of the our Sun would only have an event horizon less than 3.7 miles in diameter. The supermassive black hole at the center of our galaxy has a mass equal to about 4.5 million times our own Sun’s mass. It’s event horizon? Aboutat the center of our galaxy would fit within the smallest orbit in our Solar System. Black holes are freakin’ tiny.

0.3 astronomical units (AU) in diameter. For reference, the planet Mercury orbits the Sun from about 0.3 AU away. So, the black hole part of the black hole

Now, we’ve already established that once something enters within the event horizon, it’s (basically) gone forever. Many people get concerned that black holes suck up everything they can (black holes don’t suck), grow bigger, and eat even more. They imagine this exponentially growing beast that cannot be stopped! Let’s kill that right now. If you replaced the Sun with a black hole of the same mass, nothing would change. The planet’s orbit depends on three things: the mass of the planet, the mass of the thing they’re orbiting, and the distance between the two. Not a single one of these things would change. So, if the Sun’s not actively gobbling matter then neither would a black hole with the Sun’s mass. Even if it were gobbling up matter, if it were to consume all of the matter within the Solar System (planets, moons, asteroids, and comets; 0.0001% of the Sun’s mass), its event horizon would only increase by 6 millimeters in diameter. Astronomically, that’s basically nothing. 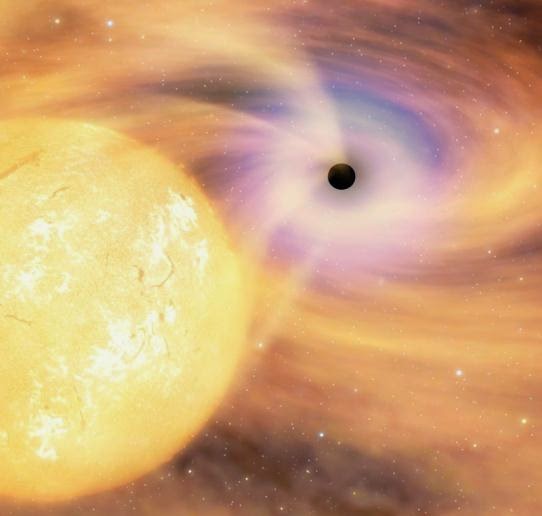 What about that demon at the Galaxy’s center? Well, it didn’t get to 4.5 million times the Sun’s mass for no reason—it’s been quite busy gobbling stuff nearby. Still, it’s not just vacuuming up everything in the Galaxy. For that black hole to have the same pull on our Sun as the Sun has on the Earth, it’d have to be about 19.5 light years. Not only is the closest black hole discovered thus far about 3,000 light years away, but we are over 24,000 light years from that supermassive black hole in our Galaxy’s center. Well beyond its influence.

What IF a black hole was nearby? In fact, what if the insane worries of certain folk were true and our recently-minted Large Hadron Collider produced its own black holes? Well, the LHC smashes two proton beams together in bunches at high fractions of the speed of light (> 99%). They come in 2,808 bunches, with 115 billion protons per bunch, for a total of about 323 trillion protons. If something were to mash all these protons together into a singularity, their combined mass wouldn’t even equal 1% of one grain of salt. Its event horizon would be imperceptibly small (less than one trillionth of a trillionth of the radius of

an electron), and if theory holds, it’d evaporate almost as soon as it was created. Even factoring the energy boost by moving near the speed of light (in general relativity, that increases the mass of an object by a ton), nothing changes. 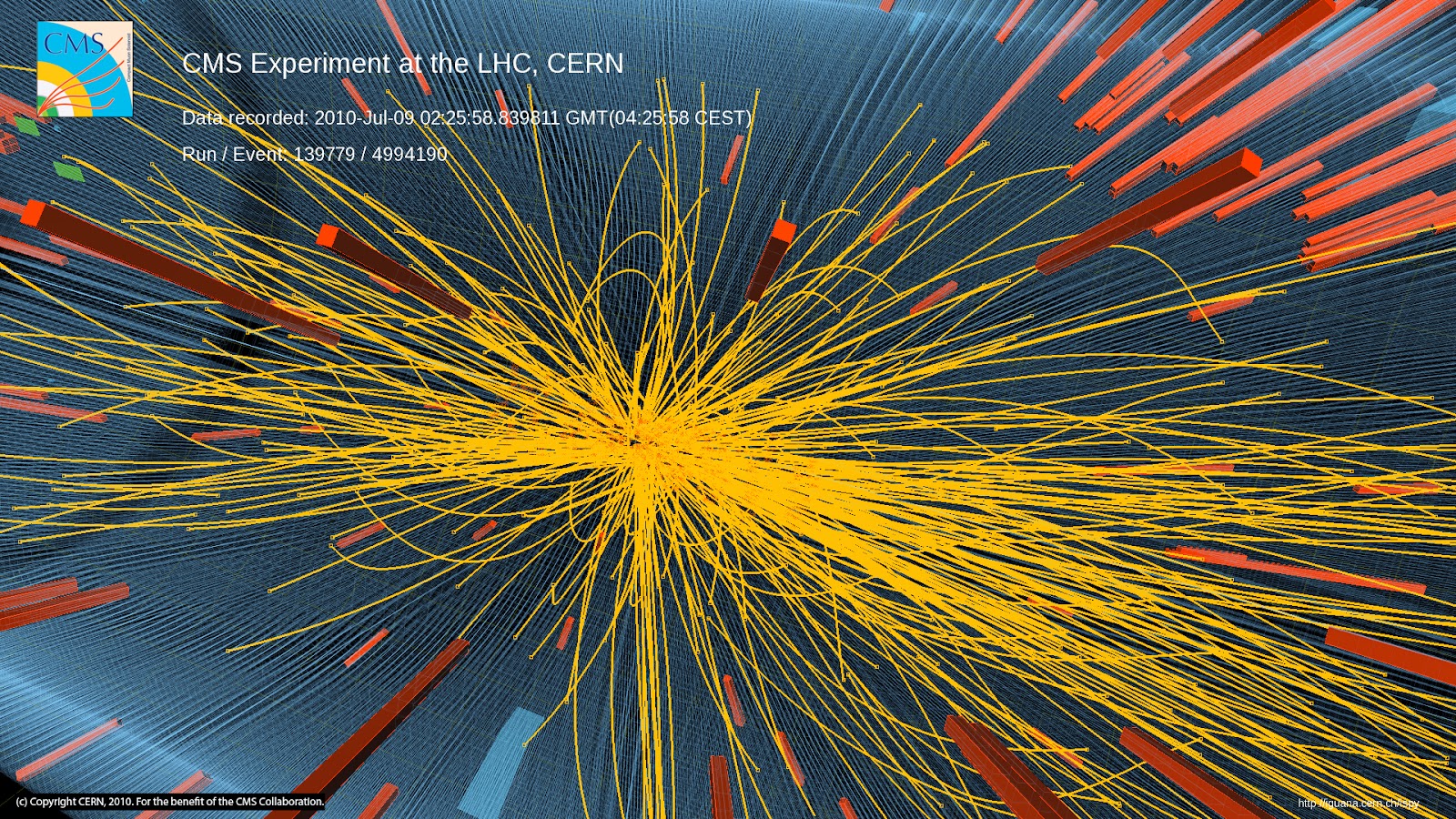 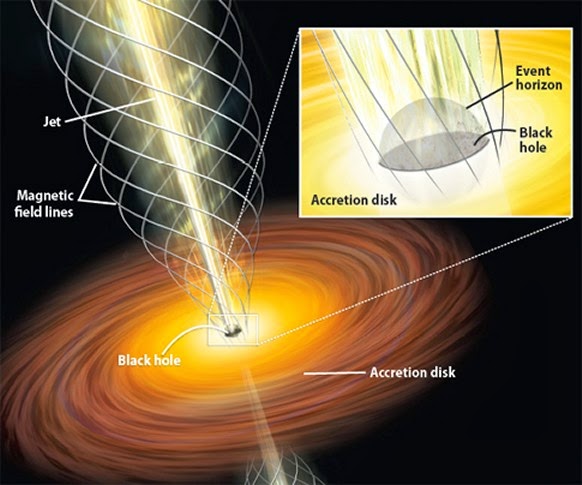 Lastly, I want to talk about observing black holes. Just because they don’t emit any light of their own doesn’t mean that they’re undetectable either by light or any other means. Swirling around many black holes, especially those in densely-packed areas, is an extremely hot disk of material called the accretion disc. “Accretion” is really just a fancier way of saying “collection”, so an accretion disk is just the disk of material collected by a black hole’s gravity (we’re gonna completely ignore any complications from magnetic fields). The material travels around the black hole looking like a frisbee with a hole in the center. Toward the very edge of the event horizon, the material is traveling extremely fast, but that speed drops off dramatically as you get toward the outer edge of the disk. It helps to think of the disk as a series of rings all touching each other and moving at different speeds. Because you have these rings of material with different speeds rubbing against each other, you get friction. And as you know if you’ve ever rubbed your hands against each other in the winter, a little bit of friction can generate a decent amount of heat. A lot of friction in the interior of the disk generates a ton of heat—so much that the accretion disk not only glows in visible light and UV, but practically screams in X-rays! So, when we look in the galaxy with our X-ray telescopes, we spot black holes (really black hole accretion disks) left and right.

Goodness, I want to write more, I really do. But this has gone on pretty long already, so I’m going to wrap it up here. I’ll end this little discussion with this: the physical Universe is an intricate, at times subtle construct. It’s a place where both little things have huge consequences and massive things don’t change much at all. If you think that what you see on the TV or movie screen is amazing, just wait until you learn about what actually happens at all levels of existence!

Disclaimer: As is per usual, this is MOST CERTAINLY NOT to be taken as a definitive source of information. I’ve “borrowed” heavily from Wikipedia. I’ve also heavily abused the laws of physics and glossed over a bunch of details about magnetic fields, spinning black holes, and other things. The vast majority here applies though. Feel free to ask questions and demand clarity. Always always always ask questions and demand clarity.