Science Sunday: The Sound and Fury of Lightning


Lightning! One of nature’s many spectacular light shows! I learned a little bit about electric discharges in college-level Electricity and Magnetism, with a brief mention as to how lightning works. However, since I never took any atmospheric science, I never got an in-depth look at it. Let’s get into it RIGHT NOW! Note, there is going to be a bit of physics jargon in this post, but I promise to keep it light. Cross my heart, hope to die, stick a needle in my eye.

Lighting in its essence is the large-scale version of a small spark emitted from a faulty wire: an electrostatic discharge. Why does this discharge occur? Well, to understand that, we have to take another look at electric charges (first one was here). Charged particles, such as electrons, generally tend to move away from areas with very high concentrations of like-charges (highly negative) to areas of either low concentrations of like-charges, or really any concentration of opposing charges.

Their motivator is the electrostatic force, their paths for motion are dictated by electric fields, and in most familiar cases, their conduits are through metal wires. Metal allows for electrons to move more or less freely (I’ll get into how that works another time), and so when an electric field is set up within a metal wire, charges feel an electrostatic force and move. That motion of charge is what we know as current. Ok, that’s set.

What happens when, instead of having empty space (note, not air, but empty space) between two oppositely charged objects like above, you have a massive obstacle in between them? An object that is resistive to the flow of charges, like say an insulator? Well, we have what’s called a dielectric. Dielectrics are basically big insulators that sit between two oppositely charged objects for the purpose of disrupting the flow of charge, and requiring more charge to build before the flow of charge can resume. The easy way that I can think about it is like a dam in a river. Normally a river would flow just fine when unobstructed, and you only need a minimal amount of water to resume that flow. However, when a dam is built in that river, water must build up behind the dam before it can continue its flow. If the river’s current is increased such that it can now go over the dam, you’ll have a waterfall over the dam (relating back to electricity, overcoming the dielectric strength of the insulator), and the flow will resume. If that dam is destroyed by the increase in current, then the river will flow with a greater force than it did before the dam was built. So it goes with dielectrics. Note, the thinner the dielectric, the weaker the barrier, and the easier it is for current to flow. This comes into play later.

You can also use an already-charged object to induce a charge on a neutral, conducting object. As you might imagine, this is called induction. That’s the gist of it, now here’s the physics of it. Consider the following system of a mysteriously-floating negatively-charged stick, an electrically neutral metal ball (good conductor) insulated from the ground, and some idiot standing nearby. Cue the self-made artwork! 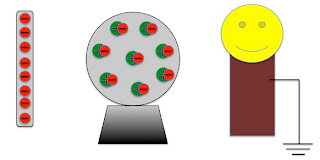 Now, we know that opposite charges attract, and like charges repel. So, if we bring the charged stick toward the neutral conducting ball (though not touching), we would expect that the positive and negative charges will separate based on their affinity for the negativity.

The electrons naturally want to get as FAR away from the negatively-charged stick as is possible. Unfortunately for them, without a conduit to some lower concentration of undesirable charges, they’re still confined to the structure of the metal ball. But consider now the idiot connected to the ground. The ground is special because it represents what is essentially an infinite reservoir of neutrality.

All charges that are in unfavorable environments prefer to rush toward that neutrality by any available means. When the idiot touches the now-unbalanced sphere, all of the electrons looking for a place to go rush toward his arm, through his body, and into the ground. Since I don’t like this guy, let’s say that the current running through his body was enough to stop his heart and kill him. He’s dead now. Soon after his body hits the floor, the mysterious charged stick floats away, onto other mischief.

With no reason to all be bunched up in one spot anymore, the positive charges redistribute due to their mutual repulsion. What’s left is a dead body, and a positively charged sphere. Ta da! Induction!

So what have we learned thus far, aside from the danger of touching charged objects? A) Charges, when given a conduit, tend to flow toward their electrical opposite. B) If you stick an insulator in the path of the flow of charges, it’ll interrupt that flow until enough charge builds up behind the insulator to overwhelm it. C) Charged objects, when brought near neutral objects, can induce a charge onto that neutral object. D) A neutral object with an induced charge can become a charged object when its electrons have somewhere to go. That’s all well and good, but how does any of this apply to lightning?

Before I continue, please know that the theory of lightning creation still isn’t even fully fleshed out by the people that actually study the stuff. So, what follows is what makes…enough sense to me. 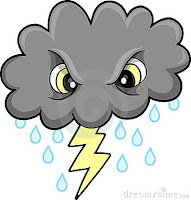 Your typical thundercloud is a cumulonimbus-type cloud (here for more on clouds). It’s big and bulky, full of liquid water at its bottom and small ice particles at its top, and has a large amount of turbulent air to help puff it up. The turbulent air contains strong updrafts and downdrafts, occurring with regularity near one another. The updrafts carry warm water droplets up from the base of the cloud, while the downdrafts transport ice crystals frozen at the top downward toward the base. When the upward-moving water encounters the downward-moving ice, they meet like two great armies on the field of battle. My own mind conjures up images of Aragorn and his army of the dead fighting at Minas Tirith. Yes, I’m a nerd of many facets, so hush. The downward moving ice is the army of the dead colliding into the water droplets of Sauron, shearing electrons off and collecting them as they move across the battlefield, downward toward the base of the cloud. It’s rarely a good idea to mix analogies. Anyway, what we get here is a massive separation of charge, with all the negative charge building up at the base of the cloud over the neutral ground.

The negative base of the cloud induces a similarly-strong positive charge on the ground. Awww snap, it looks like some current’s about to flow. BUT WAIT! There isn’t empty space between the cloud base and the ground! There’s air, and air don’t like no free electrons moving through it. No, friends. Air is a dielectric. Air don’t like none of that in its house.

Thus the charge at the base of the cloud, with nowhere else to go (I’m lying), just builds. And it builds. And it continues to build until a seriously tremendous amount of charge is present at the cloud base. Worse yet, if the cloud happens to be caught up in a strong wind, it’ll be moving, building up massive amounts of positive charge on the ground as it goes. At this point, it’s roaming and just LOOKING for something to piss it off so it can discharge some holy lightning. Once it comes across an object tall enough for there to be significantly less air between the cloud base and the object, and to allow all that positive charge to flow through that object toward its top, you’ll get a massive electrical discharge. The positive charges of the ground rush to meet the negative charges in the cloud base, ionizing the air between them, creating a bright, hot plasma. LIGHTNING!!!

Before I continue, you may notice that I said that I was lying a bit up top there. Yeah, I was. The charge does have somewhere to go, and typically it’s within the cloud. As such, most lightning occurs within the cloud. But no one cares about that. We want the good stuff!

So at this point you may be wondering when the “sound” part of the “Sound and Fury” comes in. Well, the average temperature inside of a lightning channel is ~20,000 Kelvin, or ~36,000° F. The average temperature of air is around 70°F. If we remember our basic chemistry and model the air as an ideal gas (always wrong, but close enough for this), the air inside of the lightning channel expands and expands RAPIDLY. This expanding pressure wave compresses that cooler air, creating a shockwave into that cool air outside of the lightning channel, which produces that loud booming sound that you hear whenever lightning strikes. WOO! The closer you are to the lightning strike, the louder the boom (the energy in the shockwave, while moving at the speed of sound, disperses as the shockwave expands, diminishing loudness of the sound with distance).

And that’s it! Now for one last stunning picture of lightning, because it’s just so goddamn awesome.

Disclaimer: As I stated above, I know very little about atmospheric science, and only retain a smattering of the thermodynamics that applies to it. I do, however, know a bit of physics. As such, some of my conclusions and musings may be questionable (though will always at least make physical sense to me). This is MOST CERTAINLY NOT to be taken as a definitive source of information. I reference wikipedia and other, shadier corners of the web for information, and I’m too busy (read: lazy) to do any REAL research about this stuff. If anything, maybe this can serve as just a primer. But seriously though, learn this for yourself. Don’t rely on me. Feel free to ask questions to me, as well as your local weather folk. You may not believe it, but they are out there, and they’re actually there for a reason! And if I can learn about lightning and thunder from a few hours of trial and error research, you DEFINITELY can from proper references and oodles of wikipedia. Science for all!